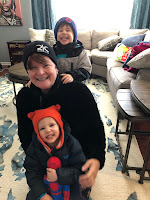 This picture pretty much says it all as far as the highlight of this past week. I LOVE these boys. We watch our grandsons Maddox (age 5)  and Nolie (age 2) on Sundays. We've really cut back on how often we watch them. There was a time that Dan was living w/ us (in Sleepy Hollow) and we saw them every Tuesday and every other weekend. Then Dan moved back in w/ Tasha and we moved to Huntley and now we see them only on Sundays. I don't know what the future holds for D&T. Right now, things are terrible between them and I'm not sure how they move on to the next "stage" since neither of them can afford their own place. And, still the children pay the price. Don't they always? I know mine did. You know HOW I know? Because Rosie tells me all the time the pain that was inflicted on her when her Dad and I divorced. She's pretty vocal about telling me how the poor decisions I made caused her "trauma". I respect her version of events. How can I not? If it's how she felt at the time, I must. But, I did get her to use a different word.........not so much TRAUMA as DRAMA and she seemed to be okay with change of vocabulary. And.......we let it rest.

But, last Sunday was such a special day with the boys. We have Kate the Teacher tutoring Maddox in advance of him beginning kindergarten in the fall. Their first session together was successful and she said Maddox seemed eager to learn. What more can we ask at this point? 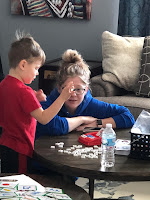 Afterwards, we went to Just Around the Corner. It's a very cute candy store with all types of specialty candies. Maddox just loves that store and we went there as a mini reward for the effort he made with Teacher Kate. Positive enforcement is SO important. 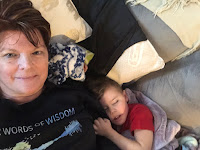 After the candy store, I took the boys home and the 3 of us settled into a nice afternoon nap. Nolan actually walked right to his crib and WANTED to nap. Then (w/the tv off) Maddox settled in behind me (which he hasn't done in SO long cause......well......he's five and doesn't nap often.) But, he was obviously exhausted and cuddled up behind me for almost 2 hours. I was a little bit of heaven on earth.

Finally, I ended the day w/ my handsome husband at one of our favorite pizza joints where we bellied up to the bar and had a few beers and a pizza.

Popular posts from this blog

When will this end?

May 11, 2018
Yesterday I sat on the back porch enjoying 70 degree weather. Warm and sunny. I was so happy that summer was right around the corner. The has been one of the longest winters that I can remember and I know why it feels that way. First, last year, we didn't open our pool (that's when we starting thinking SUMMER) until after Memorial Day. We had to replace all the pipes to the pool and close off the bottom drain. Cost us quite a bit of money, but it had to be done. So, we started the season LATE and ended it EARLY because we closed the pool on last day of August so we could take our vacation. We didn't want to have to worry about the functioning/cleaning etc of the pool so we just decided to close it. So basically, it was a VERY short pool season and that is how we measure our summers here; by just how many days we get to FLOAT in the pool. Secondly, time has really been dragging ever since that ass hat POTUS has been in Washington. Both Jeff and I wake every morning and
Read more

Nancy
I am a non-believer. I LOVE Carl Sagan. I MISS Christopher Hitchens. I wish I could have known both these men.